About Me
You are here: Home / iHeartcardio.org Archive / Day 42 through 50: Picked up by the Sheriff 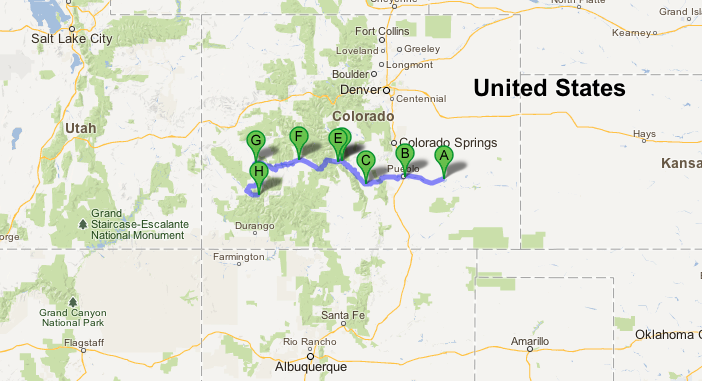 Prior to this journey I had never been more than around 1K feet above sea level.  As I entered Colorado and made my way towards Pueblo, it seemed that there was a gradual incline for miles that was barely noticeable until I got on the western side of Pueblo.

Once I headed towards Westcliffe from Pueblo, I soon realized that I should’ve left WAY earlier. I was riding thru the mountiains and it became a typical night of where the sun set way too fast and I was still about 2 hours away from my stop for the night.

This was my first real mountain climb since the Appalachians back east. I must admit that it was super scary riding thru this mountain range in the dark.  The crazy thing is that besides the occasional car that would pass in either direction, maybe every 7 minutes, it was extremely silent.  I’ve never been outdoors before and it be ‘that’ silent.  So this means I could hear absolutely everything else that was out there with me in those mountains.  At one point I heard a pack of coyotes/wolves off in the distance.  This was unsettling but, I didn’t worry about it too much because I could definitely tell that they were pretty far away.

I was riding and I got all the way to the point where I was 8 miles away from town. Only 8 miles!  At a climbing pace, I was usually doing around 5 miles an hour. So my day was nearly at it’s end.

At this particular point in the climb, in addition to the sound of the nothing I heard the strangest sound that I’ve ever heard and I couldn’t even describe accurately what it was, but I’ll do my best…

So, imagine the sound of a cat being strangled while it’s gargling listerine.  Strange combo, I know.  But that’s literally what it sounded like.  And the sound was loud enough to where I could tell that shit was just off the road in the bushes.

I stopped immediately once I heard that and turned around. It was THAT bad. I had no idea what animal that sound came from but was loud!

I had a decision to make. Keep going past the “thing” (worst-case scenario = mountain lion). Or find somewhere to camp nearby.

There happened to be a house nearby. It was out in the middle of nothing on this mountain.  I could see that dude was home as he had all the windows open.  He looked like he was gaming on his laptop or something.

Once I stepped foot on his property, I could hear his dog barking, but I couldn’t see it.  But it was definitely outside.

There was no fence around his crib.

I had the hardest time trying to get his attention while not getting bit by his stupid guard dog.  He had a window open, so I just started saying “Hello!” and he eventually heard me.

I initially asked if it would be cool for me to camp out on his land. He wasn’t cool with that. But he did offer to call the sherrif to pick me up and take me the last 8 miles into town.

So I went with that.

The guy was kind of irritated by me.

Anywho, Dude made the phone call and 20 minutes or so later the sheriff came by and picked me up in his SUV patrol vehicle. The sherrif was pretty cool. At first, I thought he’d be frustrated that I was wasting his time or something.  Turns out he was a cyclist too. So during the drive we were talking about bikes and the town of Westcliffe.

Before leaving Westcliffe, I had a mental battle with myself about whether or not I should double-back to the spot to where I got picked up.

It was a tough argument, because I knew that doing so would add an extra 16 miles roundrtip to the start of my day. I tried to reason with myself that I had already rode in excess of 16 miles while taking wrong turns leading up to this point.

But I ended up just doing it. It sucked too because a lot of it was a climb. I cursed the whole way. Feeling like I should’ve manned-up the night before and kept going.  But anyway, once I got it done I felt good about it as I knew that if I got to LA without doing the entire trip under my own power, I would’ve felt like I cheated.

There would be an asterisk next to my achievement, just like so many juicing pro athletes with their names in the record books.