About Me
You are here: Home / iHeartcardio.org Archive / Day 23 through Day 30: Thought about ending the ride 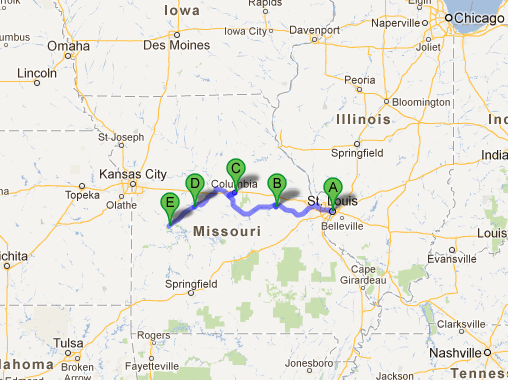 What I found strange is that for 22 days I have been inching my way across the country and my perception of the accumulative distance wasn’t really intact until I arrived in Saint Louis.

But, my train of thought was kind of like…

New York to Philly…ah not a big deal. It only takes a few hours to get to Philly from NYC on the train.
New York to Baltimore..same thing.
New York to Indiana…that’s sorta far
New York to Saint Louis…wow. that’s around 1K miles. And to drive that would take at least take half-a-day and at least a few audiobooks for sanity.

It was a bit odd once I was in East St. Louis, IL as I had to do a bit of googling to find out which of the 3 main bridges over the Mississippi river was pedestrian-friendly. I hadn’t been faced with this dilemma all trip.  This was a large issue. Because I damn sure wasn’t going to take the main interstate bridge. I love life too much for that.

I ended up using the Eads-bridge and was surprised that it had a sidewalk.  So that was a plus.  I’m fairly certain that bridge was just recently revamped to be walkable.  Otherwise I might have been SOL (Or rather SOOL. Why is it that acronyms with redundant vowels are often condensed into one letter? Someone reading this knows EXACTLY what I’m talking about. wink-smiley-face)

Once I cross into town I head on over to my Mom’s house and it was great. So great that one planned day-off turned into 4. Man, I took so much time-off that I almost forgot all about this trek. With my Mom hooking-up homemade pancakes and such every morning, I had thoughts to ditch the rest of this bike endeavor. That’s not a joke.

But, during that time-off I was able to chill out.  Let, some recent thigh chaffing heal-up and go to the outdoors shop (REI equivalent)  to get some additional stuff:

Handlebar side-view mirror…
best thing since that happend to this trip since listening to podcasts. I now won’t have to rubber-neck in traffic always.

Once I did leave STL on Day 27, I was able to hop on the Katy Trail.  The Katy Trail is a trail that nearly runs the entire width of the state of Missouri.  It’s a Rail-to-Trail, as it was once a route where trains ran and they’ve since made it obselete, pulled-up the rails, put down some fine gravel, and now it’s a trail for runners, cyclists, equestrians, etc.

This wasn’t the first Rail-To-Trail that I’ve come across as I rode a few hundred miles on trails in Pennsylvania, West Virginia, and Ohio.

Here’s the rundown about trails…

The Good:
It’s relaxing to not have to worry about someone dude who is multi-tasking by dipping mint skoal with his left-hand and texting his toothless girlfriend with his right-hand in his super-duper modified Ford F250 complete with gun-rack, lifted suspension, camo paint job, and anti-Obama bumper stickers.

That guy, might just pass by you and give you 1 foot of space…or worse

The Bad:
These trails cut through some of the most remote areas of states. There have been times where I have ridden 20+ miles, multiple hours and not run into another soul.  Also, 20 miles can feel like 40 miles when you see nothing but the same constant canopy of trees. This provides for minimal distance-reference because the next mile looks like three miles ago. And when your iPhone says “No Service”, for hours at a time, that can also trip you out.

So a good mix of the trails is ideal.