About Me
You are here: Home / Give Back / The Homeless Man Who Changed My Perspective

I just turned 31, it was my birthday/Thanksgiving weekend, and I was at home visiting family in Saint Louis. I had spent the greater part of the day doing some work out of a coffee shop, then hanging out with a friend and going on a Budweiser Brewery tour. That evening on the way home nothing was too out of the ordinary.

I came to a red light at an intersection. The intersection of Forest Park Parkway and Skinker to be exact. He was standing at a popular spot the homeless use on Skinker catching the south-bound traffic.

I saw the a guy off to my right holding a sign. I didn’t think much of it though. On occasion, if I have a few ones on me and it’s convenient enough to not interrupt a recently changed green light, I’ll give. However, that day I didn’t have any cash on hand.

As I sat there, with the heat on blast and shuffling through Pandora stations on my iPhone. I happened to notice more about this guy standing to the side of me.

As I studied him more.
I noticed he was sobbing.

My heart sank at that moment. A plethora of thoughts raced through my mind.

Why was he crying?
Why was he so young?
Was this his first day homeless with nowhere to go?

Then the light turned green.

As I drove away,my mind continued to race.

I never turned back.

That experience clouded the remainder of my evening. I went and got sushi later that night at my favorite spot, but couldn’t stop thinking about the him.

Despite not helping that young man that evening, the memory is branded into my brain. I’ll never forget that day.

As I went on to enjoy time with family, friends, laughter, smiles. I thought about him a lot during the days following. Especially as I indulged in all the ‘extras’ in life.

It’s easy to take your blessings for granted when they’re consistent in your life for so long.

The moment when I saw that guy changed me. Giving cash is fine. But what about going above and beyond and making someone’s day. What would happen if we all did just a little bit more? I wanted to go a step further and contribute care packages to people in these situations. Because it could be any one of us in a moments time.

Nobody is immune to being exactly where he was.

Here’s what I realize

1) I had nothing to do with how I came into this world, the family I was assigned to, their financial stature, their parenting ability, etc.

2) If everyone who hit the blessing lottery, whether during adolescence or adulthood, humbled themselves to acknowledge all of the external factors that played a role in their current position, imagine how different this world would be.

“Some people are born on third base and go through life thinking they hit a triple.” – Barry Switzer

Some are disadvantaged because they made one or a series of bad life-decisions. Others, had odds against them from birth. Despite such odds, some overcome them. And many never do.

Just How Far Are Any of us from the street?

Just think that if you tomorrow are diagnosed with a rare illness that your health insurance doesn’t cover the treatment of, have a freak accident, lose a lawsuit, your husband/wife demands a divorce out of the blue, that juicy adjustable-rate-mortgage that you thought was a good idea seven years ago…adjusts and now your payments are double, your bad credit spending habits catch up, and/or you lose your job. Any of this and let’s say that bankruptcy is just not an option you’re eligible for, just for sake of example.

How much savings do you really have to fall back on? How long before the repo man shows up with a tow-truck to take away your beemer? How long before the bank forecloses on your crib? Even if you’re ballerific (read: financially well-off) and your house and car are paid-off, you still don’t own anything 100%. If you think it’s a game, neglect to pay your personal property tax and real estate property tax. See what happens…

Perhaps my examples seem extreme and not likely happen.

The September 11th attacks, Hurricane Katrina, Boston Marathon, multiple public mass-shootings, etcetera etcetera. Most didn’t foresee these events as ‘likely to happen’ but they did anyway.

My intentions aren’t to spew Doom & Gloom. But rather, to resonate with at least a handful of folks reading thus making them realize, we’re all subject to various occurrences outside of our control.

Merely, only a few bad events separate us all from non-homeless to homeless. We are not in control.

From that day forward I felt like I had to do better to serve such people in need. So after some thought I came up with the idea of the care package. This care package could be carried in one’s car trunk at all times and contain non perishable food items, hygienic products, and other items of comfort.

I came-up with this concept in my head that same night I saw the homeless man. I even ran the idea past a few friends and they all thought it was a good idea. But then…

I had a good idea. One that wouldn’t take much effort on my part and could possibly change a few lives. A simple care package from a stranger may be the morale boost needed to turn one’s life around. I realized this, but kept procrastinating for a convenient time for implementation.

Fast-forward from 2011 to now in 2014: On Saturday, February 1st I went for a bicycle ride around my neighbourhood and found an isolated spot in nature where there weren’t many people around. I picked out a park bench and just sat. No headphones, no book, no iphone. Just me and the earth where minutes turned into hours. With my unstimulated mind at idle it didn’t take long.

“That homeless care package idea you had a while back, start doing it next week”.

Now, I’m not here to preach to you.
But that message came straight from God.

It was so clear I was scared at first.
After I calmed down, the excitement set in.

Once I got home, I took to the web to finally take action on the nearly 3 year old idea and began doing research on what it is homeless people really want. I already had a good idea in my head, but I wanted to use the minds of my social media friends to get some additional insight.

I also scoured the web and found some good articles that helped me come up with a general list of items to include in the care package. 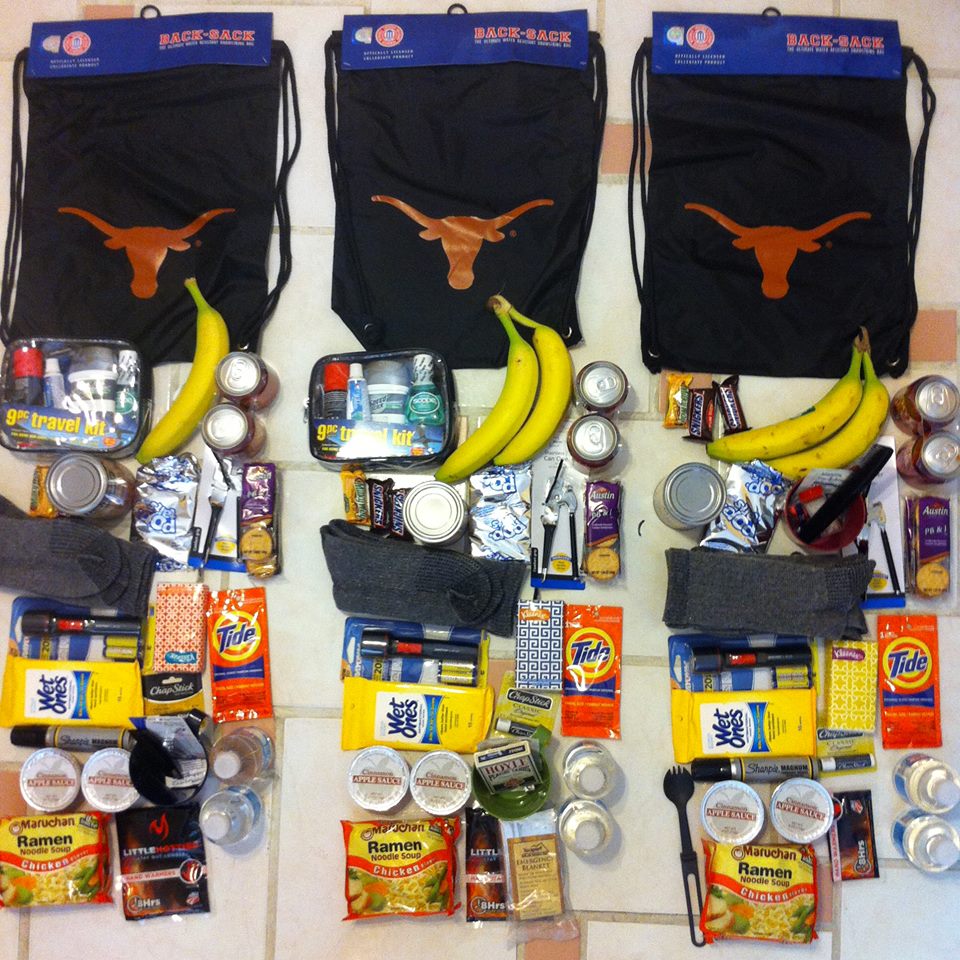 In addition to these items, I also had quite a few belongings around the house that I was in the process of selling on eBay or gifting to the Salvation Army. Because, I hadn’t completed this house cleaning at the time that I decided to implement this, I decided not to sell a few things and just include them as bonus items to whomever says they’ll find a use for them.

Chances are you have items collecting dust in your house, that someone could be using right now. I’m nearly certain you could put together a list of items similar to the one above.

After I put these packages together, I gave them away immediately. Although, the original purpose of this project was just to put the care packages together and then have them ready in the trunk of the car upon finding a homeless person at random.

Once I got all of the packages assembled, I didn’t want to wait. I felt compelled to find these people to help. On a Saturday morning, I went to an area of downtown Houston where there’s a soup kitchen. There were nothing but homeless people out at that time of morning and in that vicinity. About 3 blocks from the soup kitchen, I found a group of 5 guys just having a seat on a park bench. They didn’t have tattered clothing or 5 month beards, they were pretty well groomed, but it was obvious that they were homeless.

I just pulled up and parked the car, hopped out and asked, “Do you guys want some supplies?” One guy immediately says yes and walks over to me. I gave away the 3 care-packages and some the extra blankets, yoga mats, etc. that I mentioned above.

I was met with surprise and thankfulness. I could tell they were both in shock and appreciative. It felt great to perhaps have been a positive difference in people’s day.

You Can Do it To

Don’t do like me and wait a few years to directly help someone in need. You can make a direct impact on someone in just a matter of days. I’ve done the legwork for you. You can create your own care package using the list above and head to your nearest store.

Or you may simply just purchase the pre-assembled trunk package via the Amazon link below. Most of us have no problem taking action when the steps to do so are easy and right in front of us. You can simply purchase this pre-made package from Amazon, throw all of the contents inside the drawstring bag backpack and throw it in your trunk. This will be enough for 3 care packages and will only cost you $35.38 (minus shipping to wherever you are), which breaks-down to $11.79 per person. And of course, you can adjust the merchandise quantities for less or more depending on what you’re willing to spend.

Help a Homeless person for less than a tank of gas

Giving materials versus money removes the, “they’re just going to use it for drugs” excuse. And I’m not judging anyone. I use to have that excuse myself. But by providing these packages, you’re just simply helping another person out, even if only for the day. They are human beings, just like you and I. They’re just less fortunate for the time being.

All I ask of You

Let’s keep it all the way real.

In a perfect world, I would hope that if you read this article in it’s entirety, you would be inspired to take-action and begin carrying care packages with you in your car as soon as next week. We would all sing “We are the world” on a beach while barefoot and holding hands around a bonfire eating smores with white wine. However, I know that’s not going to happen.

If you don’t vibe with the concept.

All I ask is that you share this with someone you think will.