About Me
You are here: Home / iHeartcardio.org Archive / Day 62 through 65: Cali at last

I was too glad to make it into California. Last state of the trip. But at the same time, I knew I still had a good amount of ridiculous desert to roll thru.

The thing about the desert is not that it’s too hot or arid or anything like that.  But that there is so little out there.  You can ride 50 to 80 miles without seeing so much as a single gas station.

This is horrible when you’re hungry, thirsty, want to take a break, and etcetera.

My first day in California, I only came across one gas station and they happened to have a mini restaurant inside of it which was AMAZING. At that point the fact that they offered good food made-to-order was a huge bonus.

Closing out the first day in California I rode the last 25 miles of it in the dark, which was a bummer like always. I hate night riding. But regardless, I made it into Amboy, California and pulled into the desolate town right as I noticed that the motel I scouted out on Google maps was out of business.

The owner of the only gas station in the town was closing up as I pulled in.  Turns out his gas station didn’t even sell gas, or food really.  He was only there because this station he bought was on the historic route 66 and he was selling t-shirts and other nick-naks, among candy bars and trail mix until he got it fully restored.

I told him that I was looking for a place to stay and the motel next door that I planned on was out of business.  He offered to let me camp out in the picnic area near the public restrooms for his business.  I took that offer.  Had no choice.

The bonus was that his restrooms stayed open all night. So I liked that.

The town was so small that nobody really came by to use the restroom except for once every few hours or so.  Thus, I felt it was cool to take an entire bath out of the sink in the womens restroom.  I choose the womens restroom because the hot water actually worked, as it didn’t in the mens.  Would’ve been a bit more than awkward if someone came in there and caught me.

But nobody was around.  I found an electrical outlet on top of one of the stalls in the womens bathroom also which was great.  I charged my iphone up on it before I went to sleep. Then, put my ipod on there overnight.

As I woke-up and my shit was GONE.

I thought it was safe enough to leave it on there.  Most of the people who came by to use the restroom were men throughout the night anyway.  I had the charger tucked away in like stall number 8 of 11, what are the odds that it was found? And besides, who would want to steal my ipod with a cracked screen.  You couldn’t even see the songs you were playing.

That truly pissed me off. I used that ipod versus my iphone so that I wouldn’t drain my phone battery when playing music on it for 8 – 12 hours a day.

Well, at least I was smart enough not to leave my iphone in there. But damn. That hurt. I hate hate HATE when someone steals from me.

My last day started in Palmdale, CA. It was a tough ride because I had the San Gabriel Mountain range to get through in the Angeles Forest.  One last series of mountain climbs prior to getting to LA and confronting urban riding.

The San Gabriel mountains were interesting, I swear they were never ending.  The path I took; I knew I had 40 miles of ups and downs.  There were a few areas where I could see fire damage from a recent forest fire.  I even saw a helicopter dumping water on areas. I didn’t see any fire though.  It must’ve been close because I also saw the Fire Department out there doing drills and such.  Or perhaps, the helicopter was running through drills also.

I also came across a construction crew working on the road.  One of the workers stopped me, to tell me that he had some cold water to offer in a cooler.  He said it was for the crew and hikers and cyclists that came through.  That was super cool.  I refilled at least two of my bottles thanks to him.

I could tell when I was getting closer to LA, because the traffic picked up with motorcycles.  A lot of guys with their sport motorbikes where up in the mountains “canyon carving” as it’s called.  This is when dudes would suit up in full leathers go out on their sport bikes and enjoy all of those twisty turns up in those mountains.  Think, any sports-car commercial you’ve ever seen, and swap car with motorcycle.  It’s mad dangerous, as many areas of those roads didn’t even have guardrails. One slip-up on a patch of sand and it’s a wrap on life. But if you stay safe, I’m certain it’s an amazing thrill.

Once I got to the peak of what would be my last decent, it was an amazing feeling.  I could see Glendale, CA off in the distance.  To say I enjoyed that last downhill, would be an understatement.  And with my most unbiased opinion, that downhill was the most fun due the the number of switch-backs it had.  I felt like I was doing my own canyon-carving.

I had to fight thru the traffic of Glendale, Burbank, West Hollywood, and Beverly Hills before I got to the beach, which was my ending destination.  Once I finally got to that beach, it was a trip to just let everything set in and reflect on the entire journey that I had started 65 days prior.

I was most happy that I didn’t suffer any major injuries or worse on this trip.  In my head I kept thinking, “If I die on this trip, my Mom is going to kill me”.  She certainly hated the whole idea.  But now she need not worry about it anymore, because at the moment I definitely wouldn’t even think about doing it again.  But who knows…I have no idea what I’ll be into a couple of years from now.  I could have the itch to do it again.

But right now, all I can think about is letting my body repair itself. 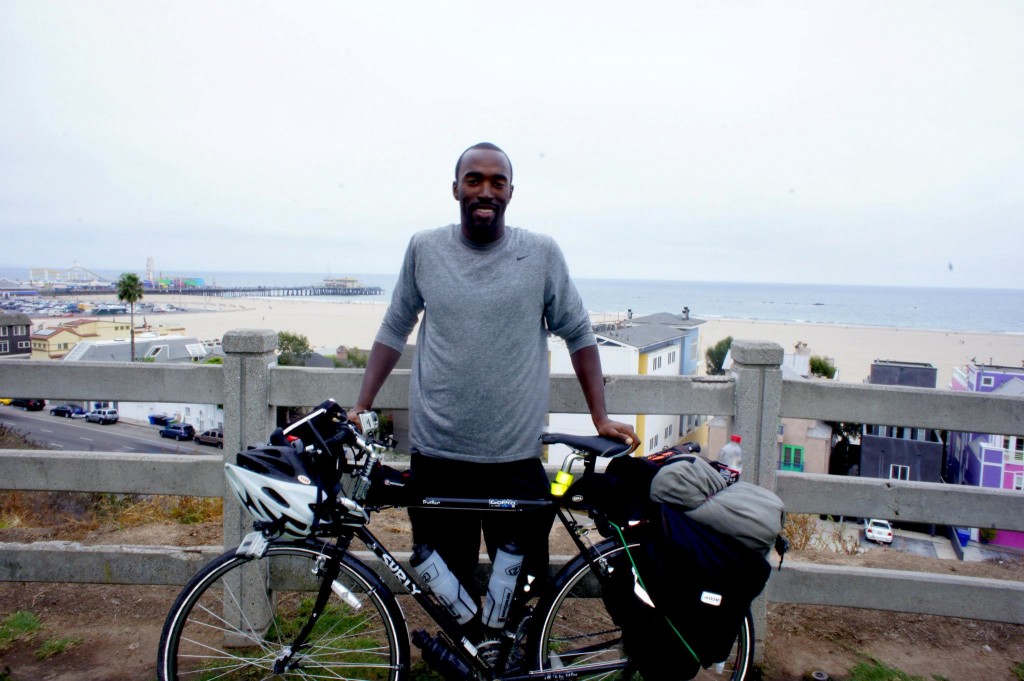 Although this journey is over, if you’d like to stay posted with what adventure I’m on now or have planned next, be sure to subscribe to my free newsletter for updates.